For the first time this year, awards were handed out on behalf of AYA to scientific and support staff whose achievements or activities are often overlooked in the current system: the AYA Recognition & Reward Awards. Winners of the prizes not only received a shiny cup, but also a cash prize of € 2,000 to use within the context of their university. Lecturer Bregje van Groningen (lecturer Youth & Media Entertainment, UvA) won the prize for ‘Teaching’, Dr Diletta Martinelli won the prize for ‘Societal Impact’ and Dr Floris Vermeulen won the prize for ‘Academic Community Care’. You can read more about this on AmsterdamYoungAcademy.nl. 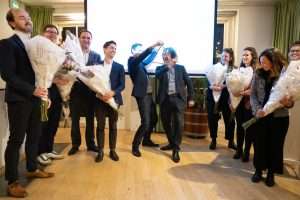 Winners of the AYA R&R Awards:

For more information, please contact the Amsterdam Young Academy office via: aya@uva.nl or aya@vu.nl. More information specifically about the Recognition & Reward Awards can be found here.