New perspectives on corruption in colonial and postcolonial society

On 11 September 2019, the former president of Indonesia Bacharuddin Jusuf Habibie died at the age of 83. Habibie governed the country during a transformative period that would lead to a more democratic Indonesia, after the fall of Suharto’s violent and corrupt dictatorship in 1998. However, Habibie’s term was short: he lost the first free elections of 1999. An important reason for his unpopularity was that he refused to prosecute his old-friend Suharto for theft and corruption, as international media recalled when Habidie had just died.

The problem of corruption is a recurrent theme in Indonesian history. Suharto stands out in this respect. The anticorruption NGO Transparency International (TI) ranked Suharto at the top of its corruption ranking for embezzling 15-35 billion dollars during his presidency (1967-1998); the example showed how corruption ‘undermines the hopes (...) of developing countries’, TI wrote (TI Corruption Report of 2004).

But the problem is not typically Indonesian, and, the role of the former colonizers cannot be neglected. Experts in the history of colonial empires and decolonization have claimed that corruption of power and money has underpinned empire-building; that abuses of power and resources in the colonial period were not mere incidents; that contemporary corruption problems in ex-colonies are partly rooted in colonialism, and that even current corruption rankings perpetuate colonial power dynamics.

There is much historical evidence available to begin investigating these claims, one only has to think of Max Havelaar (1860) written by the Dutch colonial administrator Douwes Dekker. This famous novel is one big accusation against the ill-treatment of the Indonesian population by their corrupt rulers against the background of a colonial government turning a blind eye towards misuse, itself another form of corruption. So, both local and colonial rulers were blamed for corruption. Moreover, Max Havelaar was a source of inspiration for a new generation of colonial administrators who legitimized their role with the argument that they were curbing corruption but didn’t question colonial rule as such. In the 1930s and 1940s, Indonesian nationalists fighting for independence saw Dutch colonial rule, and the economic system it had introduced, as the source of all corruption. But after independence corruption remained an issue, both as a practice (e.g. bribery; nepotism) and in the form of accusations (of corruption) against political opponents to undermine their position.

The role of corruption in post/colonial society is not researched systematically. And this is exactly what we at VU, together with historians from UGM Yogyakarta, will be doing in the coming five years in our NWO-funded programme ‘Colonial Normativity - Corruption and difference in colonial and postcolonial histories of empire and nations 1870s-2010s’. This programme compares the role of corruption in Dutch and Indonesian histories of state-formation with a focus on intersecting moments of entanglement. We do no treat corruption as a problem of ‘Indonesian’ society or ‘developing countries’ solely. Instead we want to find out what role corruption (and anticorruption campaigns) played in establishing, maintaining and contesting rule in the colonial and postcolonial years. We hope to gain more knowledge of the workings of corruption in history, and to contribute, in cooperation with our societal partners, to a better understanding of corruption today. 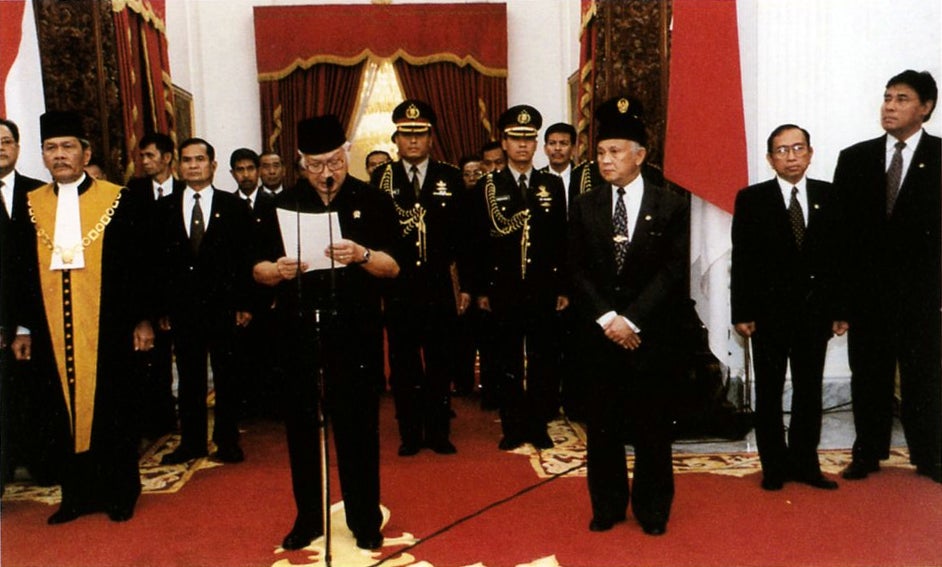 (Suharto presents his address of resignation as President of the Republic of Indonesia at Merdeka Palace Jakarta, 21 May 1998, unknown photographer).