On Tuesday, 8 November, the rectors of VU and UvA handed out the first AYA Recognition & Rewards Awards during a festive gathering in the Hortus Botanicus. The awards are intended to reward VU and UvA academics who perform exceptionally in the fields of Teaching, Social impact or Academic Community Care. These are activities that often get insufficient recognition in academia, while they are vital for a well-functioning university. AYA would like to change this, not only by making a critical contribution to the debate on recognition and rewarding, but also by actively and directly contributing to this greater appreciation by means of these awards.

In September, colleagues from VU and UvA could nominate researchers for this award. A total of 44 nominations were submitted. From these, a jury of four AYA members selected three winners. All three awards carry a cash prize of €2,000, made available from the personal budgets of AYA members. The winners may spend it on academic activities as they see fit. 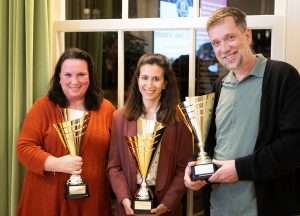 drs. Bregje van Groningen – lecturer Youth & Media Entertainment, Faculty of Social and Behavioural Sciences – University of Amsterdam
The jury was impressed by Bregje’s strong commitment described in the nomination, towards both students and fellow staff members. She is not only a caring teacher towards her students herself, but also excels in coaching her colleagues to get the most out of their teaching. The fact that she promotes the value of vulnerability and embracing one’s insecurities fits well with AYA’s spearhead theme of care in the academy, and our criticism of “academic superman” culture. The jury also feels the position of teaching staff without a PhD deserves attention. They often take up the same responsibilities (or even more) in the field of teaching as their colleagues with PhDs, and this often goes unnoticed.

dr. Diletta Martinelli – assistant professor, Faculty of Science – University of Amsterdam
The jury very much liked Diletta’s engagement with fostering mathematics in the global south. This shows that the societal impact of Dutch academia is not only about Dutch society, but can have a global impact. Moreover, Diletta’s engagement seems to stem from a genuine intrinsic motivation, since these activities do not directly further her own career, and have a voluntary character on top of her regular academic work, despite her still vulnerable position as a tenure tracker. Diletta is thus a symbol for an ethical and engaged embodiment of the values of diversity and  internationalization in societal impact activities, something both VU and UvA cherish, and AYA as well.

dr. Floris Vermeulen – Associate Professor Political Science – University of Amsterdam
This category was hard for the jury to assess, because it had so many excellent nominations. Floris was amongst these top nominations. From these – all of equal quality, the jury drew a name by drawing lots. The jury is very happy with the outcome, because we consider Floris a well-deserved winner. His nomination breathes modesty and care for others, characteristics AYA values. Also, ‘despite’ not being a big grants researcher, Floris took up a very serious task as department chair, that is mostly only reserved for professors. He then put this huge leadership responsibility into genuine service to others, paying special attention to the more vulnerable position of students and early career scholars. AYA feels this type of caring behavior for people in a more vulnerable position cannot be rewarded enough, as it helps us work on a healthy academic culture together.


AYA’s Recognition & Rewards Award is inspired by an initiative by the Radboud Young Academy. For the Amsterdam Young Academy, this will become an annual event. We hope Young Academies in other cities will follow suit.